I wrote a piece of flash fiction!!! ...It's been a while! I missed it. NaNoWriMo was great for focusing on one project, but I missed writing these little stories. Thanks Rebekah Postupak for having your FLASHVERSARY PARTY on the week I come back! I know it was all for me! Go check out all the amazing entries at Rebekah's blog here. The prompt was the picture below and a 350 word (exactly) limit. I had so much more to write... I hope I cut the right things. (Did I mention it's been a while?) Thanks for reading! :) 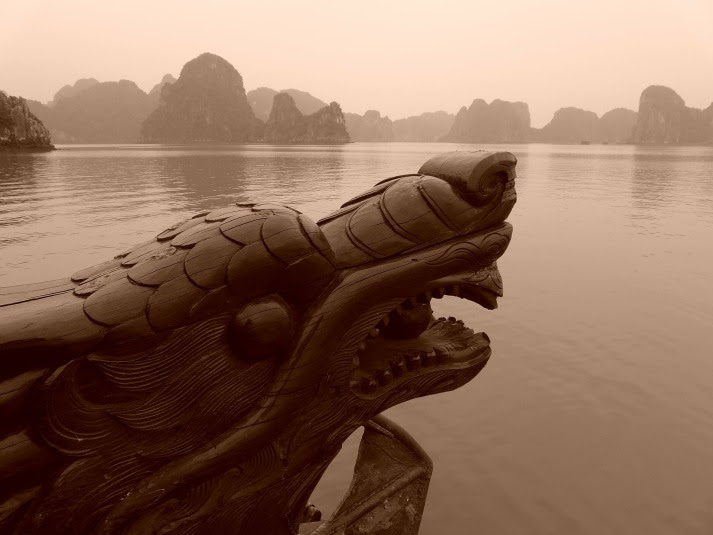 “The dragon-face is a bit stylized, don’t you think? You look nothing like that.” Amalia said, flipping her tail in the water and swimming around the simple wooden boat Erimentha had Changed into moments before.

Erimentha tilted that stylized head in thought and looked at her proctor. “I’m imitating human craftsmanship. I’ll be unnoticed.”

“Not because you blend in!” Amalia interrupted, laughing. “That head on a dinghy? It’s a good thing no one comes among The Gravestones anymore.” She completed her inspection. “Odd. Most dragons choose something a bit more ornate when they transform.”

Erimentha faced the treacherous spires that rose from the sea. She would’ve flapped her wings in nervousness if she’d been in her natural form. A dragon was made for action, not submission. “Can we get started?”

“Ha! That sounds like a dragon! On with it then! You know what is expected of you?”

“I must not Change, or I fail.” She must learn to release control if she wanted to be a Seer. She would endure. She’d made sure of that.

Amalia smiled in anticipation as she directed the water to carry Erimentha into The Gravestones, “Don’t worry, not a single dragon has passed this test the first time around. I take my job very seriously.”

Erimentha was whipped around the spires. The terror of smashing into splinters overwhelmed her. She reached for magic at her core, but pulled back, frustrated. No. She couldn’t.

“It’s no shame,” the mermaid taunted, “everyone quits the first time.”

After an eternity, Erimentha was slowed and brought back to the beach.

“Impressive,” Amalia said. “A dragon’s need for control is second only to her desire for Power. I’ve had dragons through this test the maximum seven times who were still unable to do what you just did. You pass. Do you mind if I ask how you prepared?”

“I didn’t give myself the option to fail.”

“What does that mean?”

“I want this more than anything. I couldn’t let myself stand in the way.” She paused and smiled. “I'm unable to Change. I drained myself of Power before we began.”
Posted by lissajean at 11:04 PM