Murderbot is my favorite!

Seriously, if you haven't read the Murderbot series by Martha Wells, you're missing out. The first novella is called All Systems Red, and it's a gem. There are four novellas and a novel out that are all excellent, and she has another novella coming out at the end of the month! Yay! (I pre-ordered mine in October) I may have read this entire series at least six times in the last year... 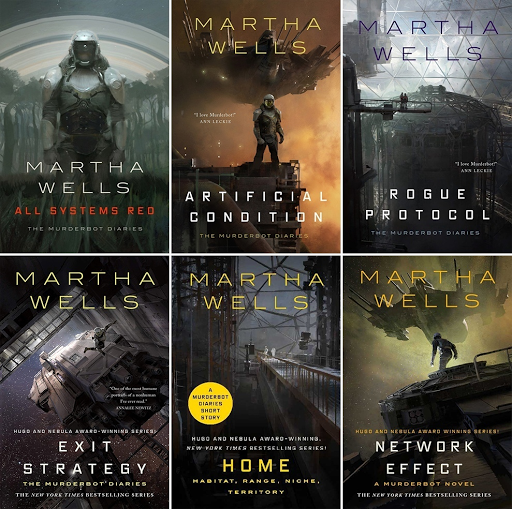 Murderbot is a Security Unit (SecUnit) for a company that leases it as cargo/supply to endeavors that might need security, like mining operations or exploration. It is made of both robotic parts and cloned human tissue. The story begins on a survey mission on an uninhabited world. Murderbot is the sole SecUnit for a team of scientists from an unaffiliated world (meaning non-corporation owned) called Preservation Alliance.

But Murderbot is no longer SecUnit standard--it has hacked its governor module. Meaning, that there is very little actual control anyone has over it because the governor module can no longer inflict pain or death if it disobeys. That said, all Murderbot wants to do is watch its shows, so it continues to fake being controlled so that it can download and watch media all day long.

Also, Murderbot doesn't really like interacting with humans and doesn't at all understand its own emotions--especially the ones that mean it might actually like the humans it's working with almost as much as the characters on The Rise and Fall of Sanctuary Moon. So when things start conspiring to harm its clients, Murderbot needs to do something about it.

Okay, that's as non-spoilery as I can get. Especially since all I want to do is gush about how much I love all the things about it. Of course all I want to do is give Murderbot a hug, but it would absolutely hate that... I have friends like that. If you do go read it, I think Ratthi is my favorite human in the series, but ART is my favorite person...well, other than Murderbot.

Anyway, the stories are amazing, and you should read them. Enjoy!

Posted by lissajean at 9:00 AM No comments:

Well, I obviously disappeared into the void somehow. Sorry. Without Finish That Thought to keep me engaged here, I guess I've found it difficult to remember to post. I've never been much of a diary keeper, and blogging feels similar.

However, I'm going to try again.

First, an update on how things have been going:

I finished that MG story, and researched agents and whatnot, then sent it out into the void. And didn't get a nibble (Well, I got one request for a full, but that's it--still all rejections.). That story is currently waiting for another rewrite, but I think this time I may know how to fix it (Thanks, Cedan!).

I am currently deep into another large edit of my YA fantasy novel, and I think it's getting close, so that's super exciting.

I still haven't edited the MG Spaceship book, but I've brainstormed it, and I think I have a clear plan ahead for that one also.

In the meantime, I've started and almost finished a new YA fantasy romance. I'm probably about 80% through the first draft, and it's going well. I haven't made much progress on any of the other stories.

Second, a look ahead:

I think I can finish the edit of the YA fantasy novel by summertime. I'm hoping it's before then, but time is moving too quickly. Once that edit is finished, I'm going to send it out for another round of beta readers, then do the agent thing once I've made any tweaks needed.

I also expect to finish the first draft of the YA fantasy romance by the end of the summer. It'll go through my alpha readers and beta readers by the end of the year. I'm not anticipating this one will need the extensive edits that the other one needed. *crosses fingers*

In the fall, I hope to edit the MG Spaceship book finally. I'm excited to get this one out into the world, and I'm appalled that it's taken me so long to make decisions about it.

Finally, I'm going to attempt to tie writing a blog post to a weekly activity so that maybe I can be better about posting. Hopefully that works better than the last few times I've tried to jump back in here. :) If you have any great resources for writing prompts, post them in the comments for me. They're always fun to play with.